The lights are on but nobody is home... Yet

It is Wednesday morning. The morning of power. The Healdsburg electric company is officially removing the power lines from our temporary power pole and dropping a new electric feed from a new power pole on Fitch street. No more one hundred foot extension cords snaking through the house. Every room has its own outlets and will soon have temporary light fixtures. 227 North street has never had power like this in its one hundred and forty year existence. Power first came to the house about 1905 and was minimal at best, with electric lines surface mounted on the the walls. In the early 50's the house was condemned because of the ancient electric service. Shortly there after a small service panel was mounted to the rear of the house and electric service provided for two rooms. Any other rooms that had power were fed by long orange extensions cords that ran from the back two rooms. But now... Power Up!

The stairs to the panel were completed on Saturday leaving an easy path for the City Inspector and Healdsburg Electric. 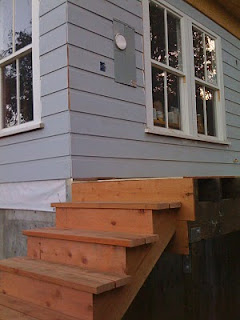 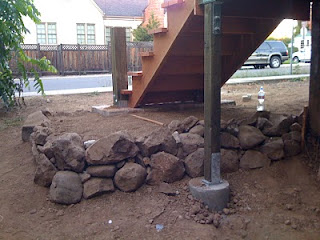 The panel at the top of the steps, now easily accesible by the electric department, and the rock retaining wall built behind to hold the soil in place on the slope.

*** News Flash ***
Sunday August First 2010. This morning the boys at 227 North Street connected the new water supply system in the house to live water service. Phillip, Mark, and Brent, ran around the rooms of the house as fast as they could looking for leaks in the system. Inside the house there was only one fitting that leaked and it was quickly repaired. Under the house was a different story. The new hot water manifold was leaking as were the connections for the hot water heater and the whole house filter. Shut down and try again. Quick runs to the hardware store, and flashing pipe wrenches managed to take care of every problem with the exception of the water heater. A stupid washer that had accidentally been mangled was the culprit, no one carried that size except a plumbing supply, and of course it was Sunday... not a single supply house was open. But a small water drip would not stop the boys from moving on toward the main event... Testing the sewer lines. An inflatable plug was put into the sewer line in the basement and a brand new water hose was snaked up through the house to the third floor where the end was put into a test hole and the water was turned on. Slowly watered gurgled down into the pipes filling them with thousands of gallons of water, from the basement to the top of the third floor. All three boys held their breaths and listened, moments ticked by and it became clear that all was quiet on the third floor...

This just in... while writing the news flash above U.S. District Judge, Vaughn Walker's ruling on Proposition 8 was made public. Judge Walker has declared California's prop 8 as unconstitutional!
A big congratulations goes out from the writing staff to all of our same sex couple, married friends!!!
Please read further by clicking here
We now return you to your regularly scheduled program.
*
All three boys held their breaths and listened carefully... All was quiet on the third floor... Quickly they moved through the third floor feeling pipes for wetness, then down to the second floor where the distinct sound of heavily dripping water could be heard... gasps of horror issued forth from all three as they tore through the second floor and down to the first to find a beautiful fountain of water dripping heavily from the ceiling straight down onto the brand new (unfinished) walnut floors. A second leak was pouring out of a wall nearby, a third in the kitchen, and one in the basement. "Bucket brigade" was shouted aloud as buckets and towels were quickly put to their intended use. Phillip and Brent rushed to the cellar to pull the plug. Brent stuck his fingers down in the main sewer line to release the pressure on the balloon that blocked the pipe and as it gave way all those thousands of gallons of water gave him a helping hand. The plug moved down the pipe rather than coming out of the clean-out hole, sufficiently blocking any chance the water might have had at heading for the city sewer lines. It instead burst straight up in the air into the basement with such force that the under side of the living room was completely soaked with water, along with the new furnace ducts, wiring, Phillip and Brent. Phillip pushed his hands down hard on the opening to stop the flow but the pressure of the water was so great that it simply went to the left and the right under his palms. The utility light exploded as Brent managed to grab the safety chain of the plug and pull it free of the sewer line. The last of the remaining water in the system went quietly down the pipe to the street. In the aftermath of hurricane Sewer pipe, Phillip and Brent crawled out into the sunlight soaked to the skin and covered in dirt like to two drowned rats determined to fight another day. The sewer lines that leaked were in the first section to be put in and many things were learned during that process. In hind sight, those DIYers should have gone back and thought about redoing the first of the drain system once they had learned how to handle, fit and glue it like the pros. The lines have been redone and Saturday morning the system will once again be filled with water to test the repairs, with luck all three will once again emerge into the sunlight, but this time dry as a bone. 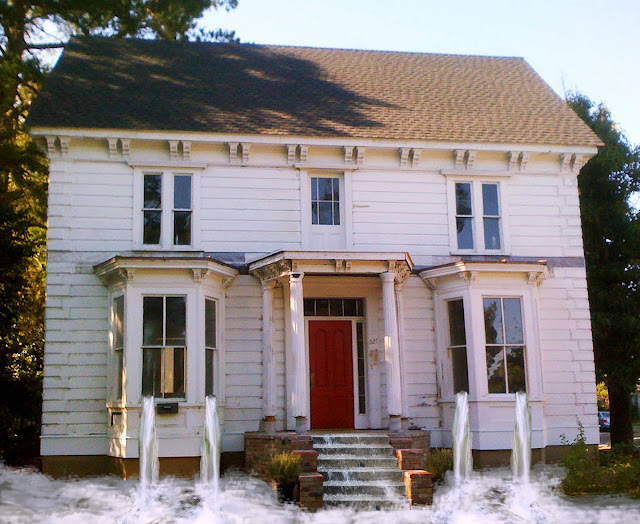 PS... I am pretty sure everyone looking at this picture knows that I created it in Photoshop, but just in case I thought I should let it be known that... I created the above picture in Photoshop... I only say this because my Mom called all worried about how much damage all that water pouring out of the house had done.
Hee, Hee, Hee!
Posted by Mark at 5:34 PM