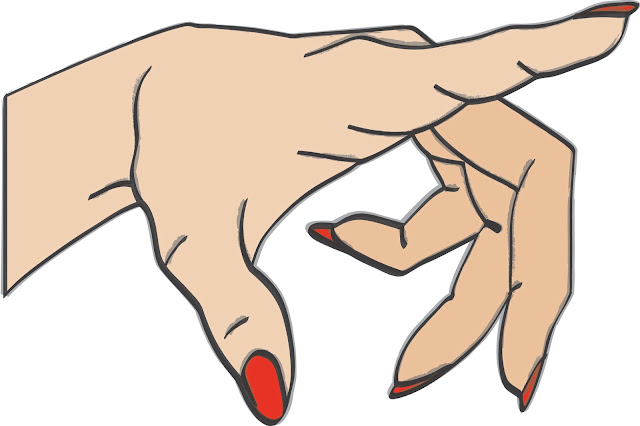 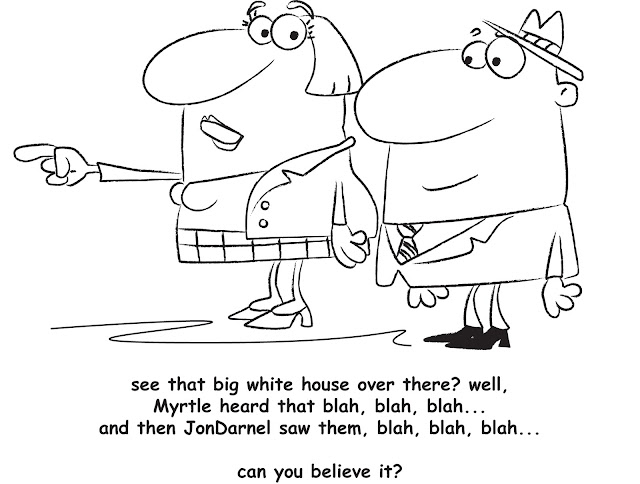 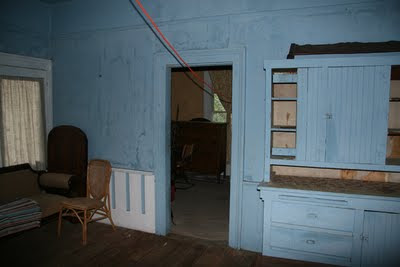 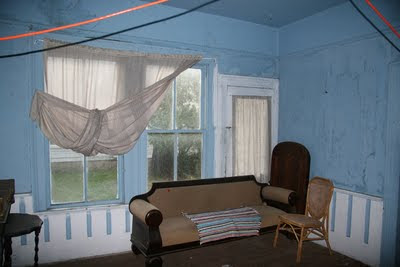 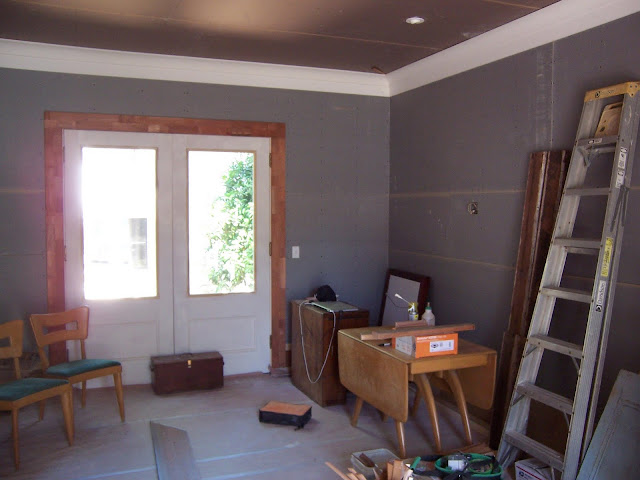 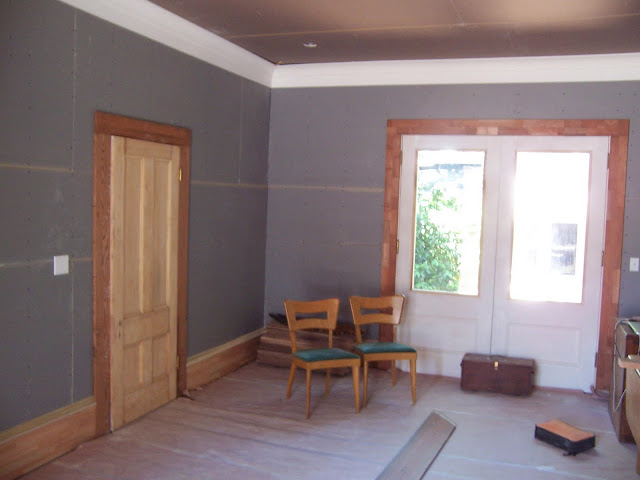 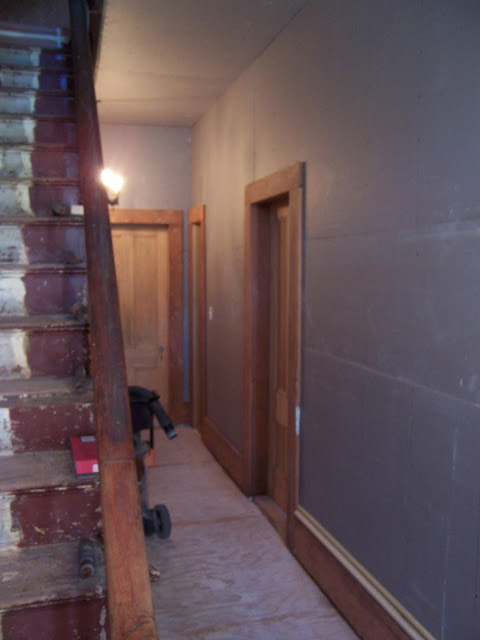 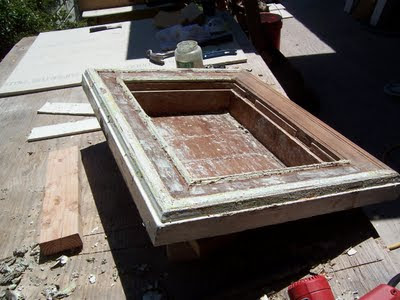 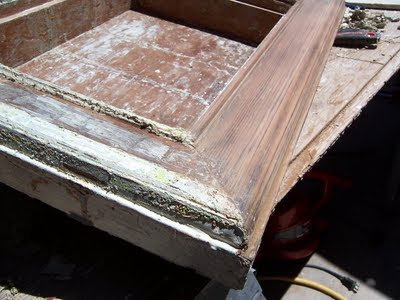 Here is one more for the record. A few days ago I was bored with the projects I was working on and I had that itch. You know the one. The Itch that makes you want to do something that you know you shouldn't do yet, but you have been dying to tackle it. With hammer and wrecking bar in hand I headed for the center hall. I took one look at the staircase, and started prying away the trim, slowly and carefully I removed the first sixteen spindles, that's when Phillip walked into the hall. Ouch. Lets just say he was not very happy with me. We have a slightly different view of what needs to be completed within the year so that we can refinance our mortgage, and the staircase did not fall into his  scope of the needed items.
Now I am only allowed to work on the staircase on my own time, whenever that is.
So next time you drive or walk by, using the finger, and you see me working on the staircase, you will know it is "whenever that is"
hehehehehehe
Posted by Mark at 2:57 PM 11 comments

If the shoe fits

There was a small chance we would make the cover of the magazine, but this did not come to pass. But it does not really matter as the journey has been fun and it is great to see our home in print, even as rough as it is now. There are also beautiful reprints of Tania Amochaev's photographs that were taken before we bought the house.

NEWS FLASH
Rumor has it that a "crew" descended on 227 North Street a few weeks ago. Local gossip has confirmed that a photographer, an art director, and a Magazine editor, were holed up in the old house for hours. As this goes to press we are still trying to find out who, what, when, where, and why... so stay tuned for more details that will surely follow. Now back to your regularly scheduled blog entry.
* * *
The over the fence chatter is true. Let me take you back to the beginning of the story. I am waving my hand in circles, in front of your eyes... circle "you are getting sleepy" circle "sleepy" circle "you cannot keep your eyes open" circle "when you awaken it will be Sunday morning the 15th of May" circle.
Ugga Bugga stuff!
May 15th was the Healdsburg annual Home tour. For the second year in a row our home was the special attraction. "Special attraction, indeed!" Roughly five hundred people were led by eight of us, acting as tour guides, through the house. Followed by a thank you tour guides, Sunday dinner della familia. We had such a great time and all that toured the house seem to find it fascinating and intriguing. Except the guy that I almost got into it with over single pane glass windows... but that's another story!
Drassa Frassen idiot who has been swayed by big window manufacturers.... arg!  Ooops, story for another time...
Monday morning I received a phone call from the editor of California Home and Design. Mary Jo Bowling had been on the tour and she was so impressed with the DIY nature of our home, from design, through construction, to decorating, that she wanted to do a feature article on the house and our journey, focussing on our Kitchen.
Andale! Arriba! Arribe! VIVA LA DIY'ERS!
We first did a two hour phone interview, followed by a five and half hour photo shoot. I had been around the film industry for years, but I have forgotten the amount of time it takes to set up, get approvals, and then take the picture. It started with a tour of the house, and then discussions of how to set our Kitchen for the best shot. Something that would show the not quite finished edge to it, and yet make light of its beauty at the same time. Then the focus turned to the two of us. We had cleaned ourselves up that morning and dressed casual, but nice, in preparation of the dreaded camera. The Editor and the art director took one look at us and asked, "is that what you wear when you are working on the house?"
Suffice it to say that wardrobe swooped in and a costume change was made. Out came the ratty jeans, the faded T-shirts, and the shoes with holes in them. Two setups of the Kitchen, and two different rounds of the two of us, and they swept out of the house and were on their way. The Magazine comes out latter this month and there were small hints that our Kitchen may, and I mean may make the cover. 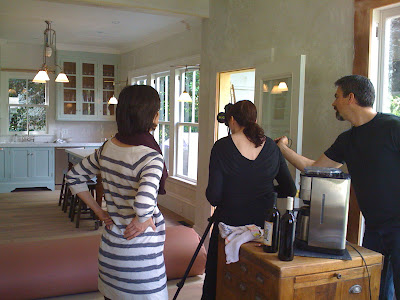 It feels really amazing to know that we are being published, guess we're not quite the hacks we thought we were, and keep your fingers crossed that we end up with a cover shot.
Posted by Mark at 6:45 PM 2 comments