23 Towels will solve everything

The Master Bathroom has made great strides in the past couple of weeks. The tile is finally all in place and there is only a little bit of grout left to do. I have never been so happy to see a job complete as I was with this tile. The tile we used in our kitchen was a joy to work with, handmade, crackle glaze, that just went onto the wall in a breeze. But the marble tile was painful every step of the way. I am such a perfectionist that I beat myself up when I start looking at it too close, but everyone who has seen it says it is beautiful and would have cost a mint to have a tile installer do the same job... so I suppose I shall stop staring at it and say...

"VIVA LA DIY'RS!"
But then I start staring at it again. Phillip says not to worry, we can put a towel bar there. So our master bathroom will have 23 towel bars. With so many towel bars, I don't know why we bothered with the tile to begin with. 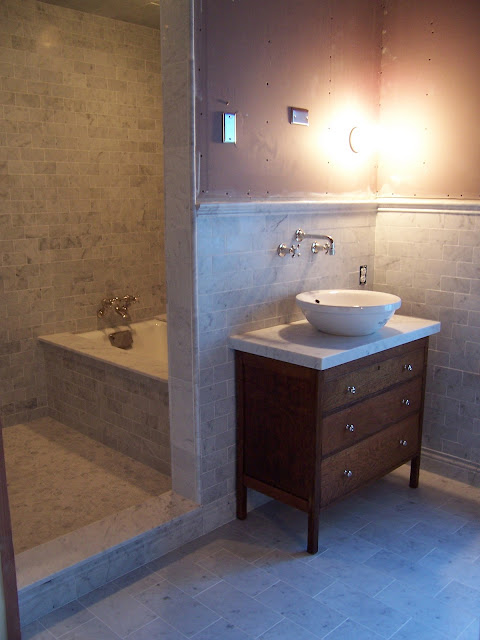 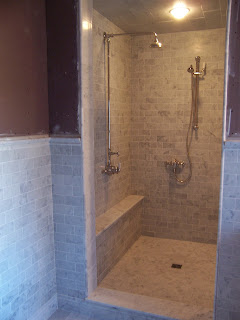 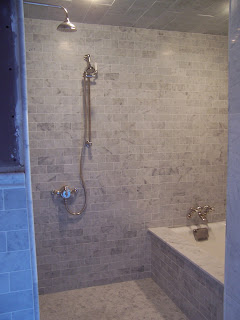 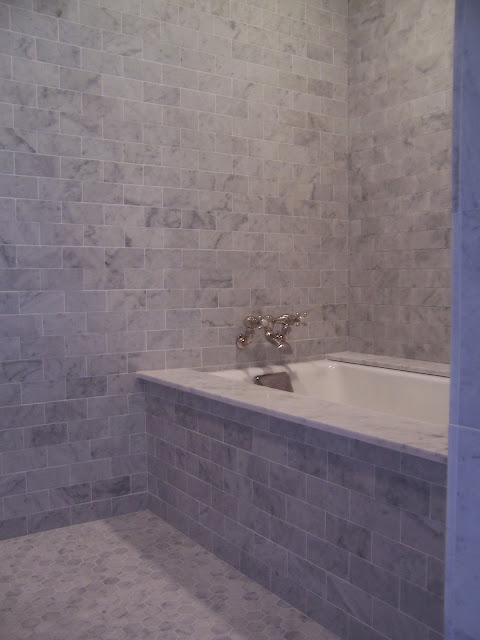 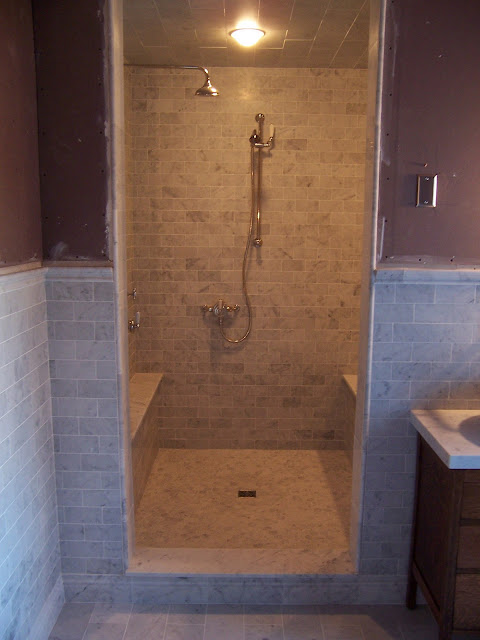 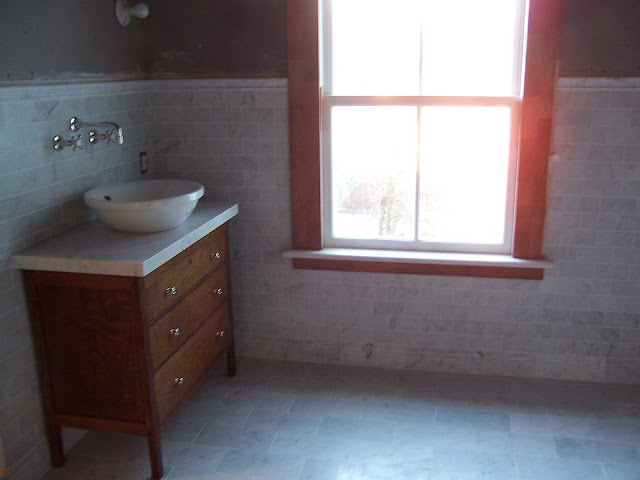 Still so many things to do to finish, second vanity, plaster, toilet, light fixtures, paint, but a bit closer than we were a few weeks ago, and it is usable. Being able to take a shower in your own home is a joy and convenience that everyone takes for granted, but take it from us that it is more of a miracle of the modern age. Next time you stand under that beautiful steam of warm water, imagine nothing come out of the spigot but air.
Posted by Mark at 1:42 PM 10 comments

What happened to the Holidays?

A month has passed since my last post. I can't believe it has been so long. December and January have flown by, as we have been boys on a mission. If you drive by 227 North street at night you will notice a rather unusual thing... lights on late at night... Yes it's true, we are living in the wreck. Call it more of a camping trip if you will. It's a bit rough and we have definitely been put through the emotional wringer, but we have somehow managed to carve out a small space to reside amidst the construction zone.


Our favorite Christmas Elf was here for a four day visit. My Mom had returned again to lend a hand. She jetted quietly through the border between Oregon and California, with a carload of illegal "in the State of California"  oil based paint for the kitchen cabinets. Mom and Phillip spent two days putting the first of two coats of paint onto the cabinets. Thank you Mom! 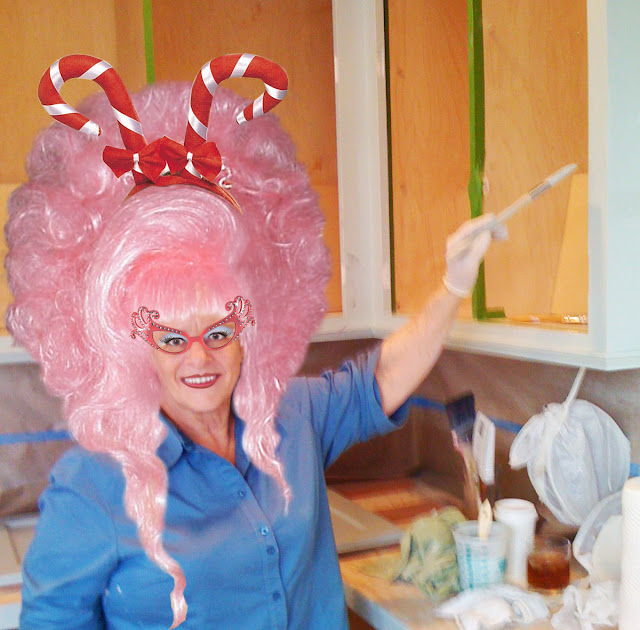 As always my Mom was dressed for the season ready to lend a hand. If you need an explanation of Mothers special look, please read "A New look and 'Plan B'", posted on April 6th 2010
Christmas was right around the corner and we were working our butts off because on the First of January we were moving into the house come hell or high water!
Garry joined us from Los Angeles to spend a week working on the house. From Christmas Eve through the Second of January we were all on full time duty.
Phillip was on door stripping and plumbing wrap ups, Garry and I were on tile in the master Bathroom. The never ending, four week job of laying the marble tile. We focused on the main room of the bathroom leaving the shower/tub (wet-room) to be done after. None of us had any idea how long of a process the marble tile would be, nor how difficult it would be to handle. Although cut by machine, each one was hand fed and finished into the machines, leaving tiles that appeared to be the same size, but let me tell you!  With the floor complete we laid marble baseboards and then started up the walls. Forty seven inches up with white marble subway tile, and capped with a marble molding. Suffice it to say it took us all week to finish the main room of the bathroom and I ended up taking another week off to tile the shower.
Which means that on the first of January we did not have a shower to use in the house. We were having meltdowns left and right, and put off our move for one week. The floor of the shower was tiled on January first, and then up the short walls, and the addition of the marble caps on the second. 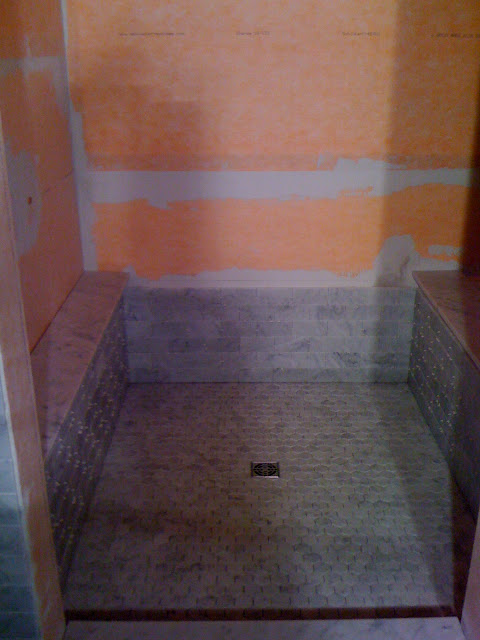 The ungrouted shower floor and short walls, the tub is to the right.
It was time to stop tiling the walls and focus on the ceiling of the shower. Ah the ceiling. We had done a lot of reading about how to do this and most everyone assured us that the tile would stay. I guess they live in some fantasy world that does not have any gravity. We began Monday morning by installing 5 rows of the 12 by 6 inch tiles to the ceiling above the shower. Everything seemed ok, the thin set was holding, yeah! So we took a short break. Downstairs we were having a laugh and enjoying a fresh brewed mountain roast, when we heard a loud thunk, followed shortly by another, even louder thunk, up the stairs we raced. Four tiles had come crashing down, two of them shattering into pieces.
Back to square one. Take all the tiles down, clean them and the ceiling and start again. We decided we were using too much thin set and our bond would be stronger with more suction if we used less.
I could go on and write the whole story of the second application but you might find it repetitive.
This is the shortened version... Install, mountain roast, thunk, shatter, back to square one.
Tuesday morning found us beginning again, but this time we were armed with sixty two by fours.
Apply a row of tiles, apply a two by four under the row and add two legs down to floor. A forest grew inside our shower and on Wednesday morning the tiles were there to stay. 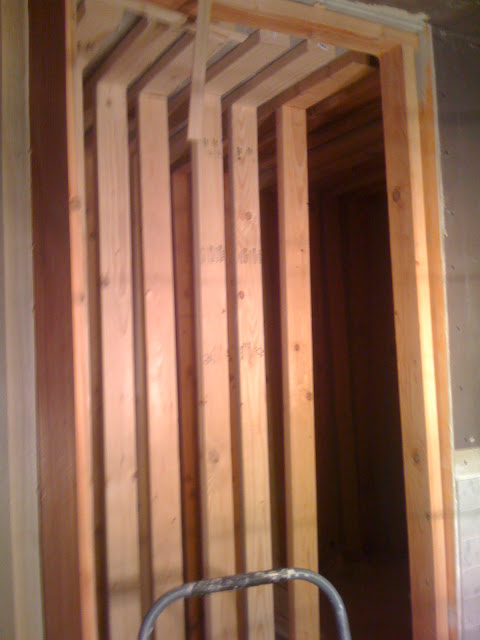 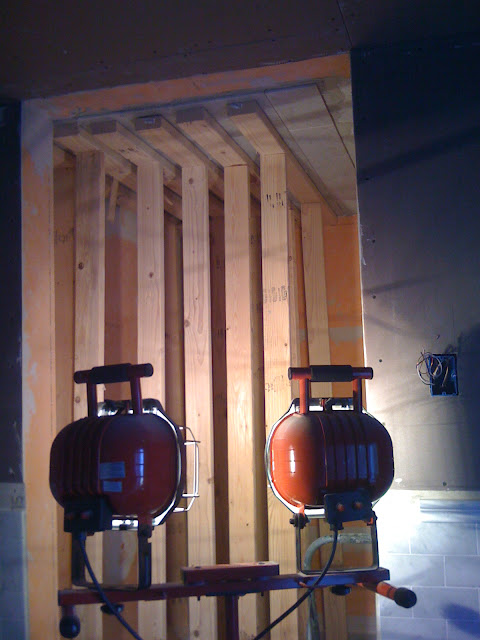 We did indeed move into the house on January ninth. The Shower was not quite ready but we managed for two day by the graces of Lucy and Archie of the Camellia Inn two doors down. They gave us the use of a room for two to three nights so that we could shower and clean up. We could have slept at the Inn but we decided it was time to take the leap and live in the house we had now owned for a year and a half. I also need to get down and thank our friends Suzanne, Paul, and Steve who busted their asses to get us moved from the shack to the big house.
Every day we make small steps toward a finished home and although nothing is complete, the signs are starting to show. Below are three shots of the kitchen, a never seen "before picture", a mid picture, and a couple I took last night and this morning. I think you will agree that when we are finally done with it, it will be beautiful! 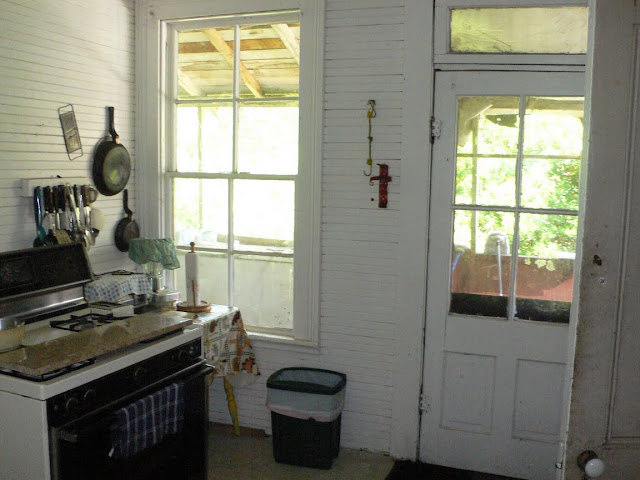 The "Before" Kitchen... hard to believe it used to look like this, and be this small. 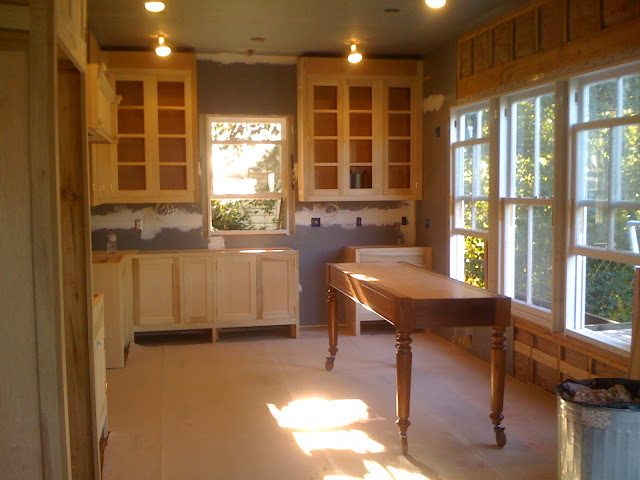 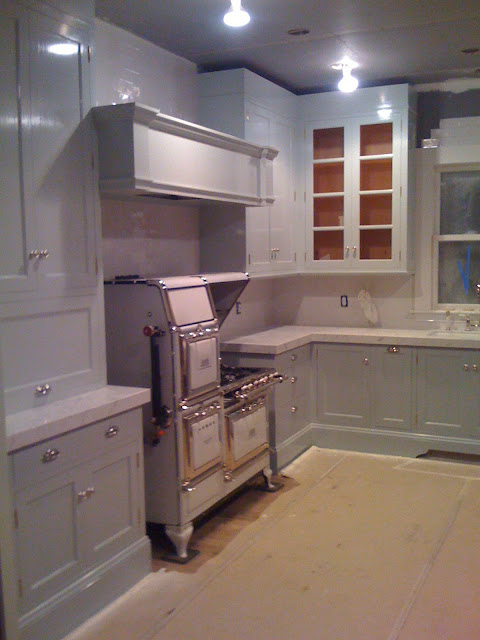 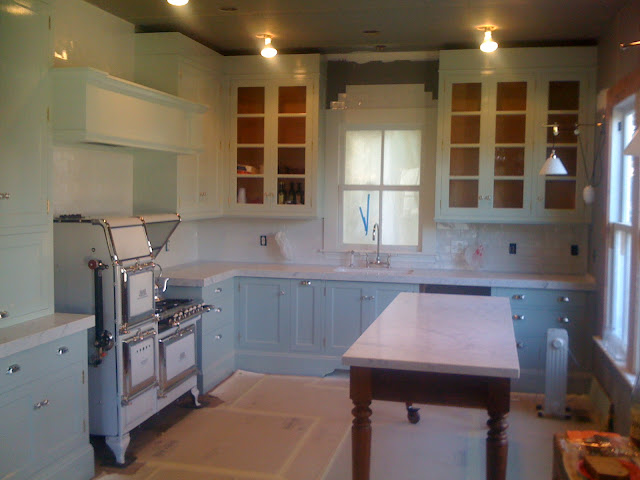 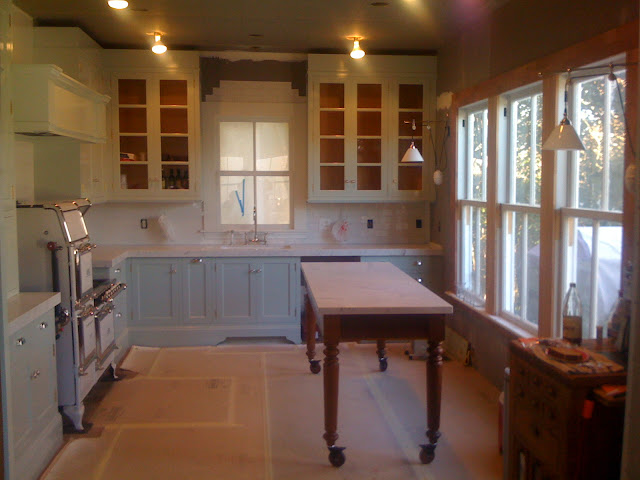 But I think you get the idea... she gonna be purty!
PS... Oh by the way, in case you did not notice, our stove has arrived! we need to raise her up about five inches, but what a statement it makes!
Posted by Mark at 4:39 PM 11 comments