Floored with ghosts of Vermin

We spent the weekend getting our feet wet with the removal of plaster and lathe from the former and soon to be dining room. Nasty, nasty work! The plaster, worse, its scratch coat (the first layer of mortar like plaster applied to the lathe), is full of nasty ancient horse hair and fibers, and is so disintegrated from years of abuse and neglect, that it just dissolves into a sand like powder. Masks and goggles were the name of the game but even they could not combat the dust and dirt. As each wall was opened up to the light we found, to our horror, every pocket between the wall studs had been home to a furry critter at some point. Nice soft little nests, enormous amounts of walnut shells, droppings, miniature grand staircases, tiny crystal chandeliers, fringe, tassels, and floral wallpapers, all abandoned and rotting as if the Yankees had booted them out long ago and looted all of the silver and jewels. Well good riddance! For now our internal civil war seems to have ended, with no signs of vermin anywhere. Well, accept the darn Pigeons that is. Last week as the ceiling was removed from the dining room we had to battle the Mother pigeon and her two young. The Mother had taken up residence months ago and decided that under the floor boards was a great place to hatch and raise two babies. Ugly little featherless things they were too. We decided to let them stay until the foundation was complete and it was time to raise the new walls. As the ceiling was finally removed it was discovered that not only were the babies still there, albeit they were now much older and seemed ready to fly, the Mother had gone and laid two more eggs. Has she never heard of birth control? Pigeon condoms, Planned Pigeonhood? We were completely at a loss as what to do. So for the next three hours we went off to the hardware store, purchased a window flower box, mounted it to the house nearby, moved the eggs, and then with the intention of drawing the Mother to the make shift nest we captured one of the babies, and moved it to the flower box with the eggs.  We followed that with the capture of the second baby, and moved it to the flower box as well, only to have him take his first flight leaving the other baby crying in the box next to the eggs, and the darn Mother sitting on the roof the whole time trying to figure out what in the hell these stupid humans were doing. I suppose the end of the story is a bit sad, but we tried, and did all we could. The first baby finally took off from the window box to join it's Mother and sibling on the ground. The Mother never did find where we moved the eggs, or if she did, she did not like their new home, however she and the two babies are just fine and refuse to vacate the area.

Today I ordered floor samples. Now it may not sound very exciting to all of you, but for us it is very exciting! We have known for quite some time that the floors in house would have to be replaced, or covered actually. The floors are wide plank redwood, and it sounds exotic and potentially pretty, however... They are in very rough shape. A large number of the planks are what is called flat grain, meaning that the layers of the grain of the wood are lying perpendicular to the surface. What happens with flat grain flooring is that it flakes off in large sections over time, and the more you sand, the more it flakes away. It is definitely strange that the original floors would be made of such an inferior cut of wood, but a discovery has been made that explains it clearly. Wall to wall carpet. When the house was built a carpet company was hired to come in and carpet the floors. Borders were laid around the outside edges of every room and then the centers were filled with a field carpet. All of this was done by hand. The photo below is an interior shot of the house, and appears to be approximately 1895,  notice the carpet on the floor. It looks like it was quite stunning. 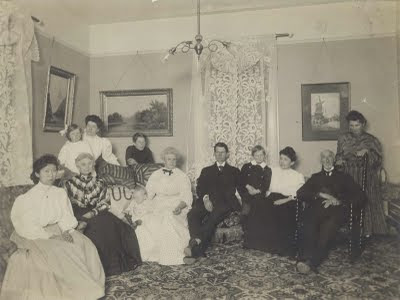 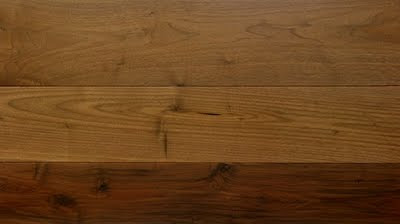 But not exactly our style. So wood it shall be. Walnut to be exact. We have looked at so many possibilities. Hard pine, too rustic, Fir, too soft, Oak, too pedestrian, Bamboo, too green, Hickory, too expensive, Wide plank Walnut, just right. Walnut will dress the house up a little, match the banister, and by using a nail down installation, look as if its always been there. A lovely medium dark glow.

The other samples that I ordered today are the tile samples for the center hall. Encaustic tile, is an inlaid pattern tile that is generally speaking, cloisonne in tile form. The effect will be of a tiled Persian carpet from the front door to the dining room door. 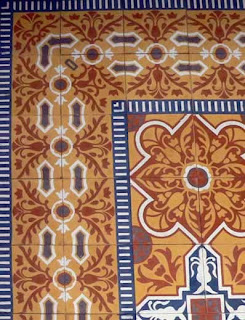 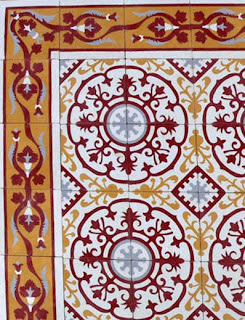