Bitter party of one, your table is ready 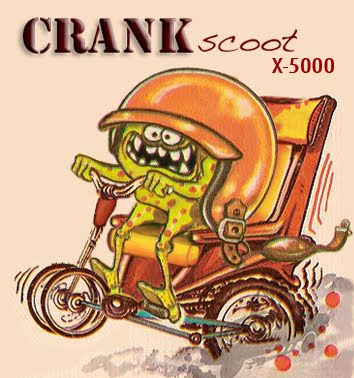 Image created in a collage style based on artwork by B.K. Taylor


I may get in trouble for this one folks....
Tuesday morning, as we waited patiently for the house to be lowered down onto the ground, nerves were tight, tension and excitement were in the air, the house was so ready to come down. The monstrous beams holding the house aloft were starting to bow downward on the ends, and consequently the living room and the library had developed horrible humps in their floors as the outside perimeter walls headed south leaving the center in the upward position. We stood watching and waiting when down North street he came. One of those folks you see around town in those electric wheel chairs. Hunched over, head pushed forward, eyes wide, and definitely on a mission. He rode that chair as fast as its engine would go, hold onto your hats ladies because I think he may have managed a whopping two miles per hour. With that electric motor whining like a dying sewing machine he came barreling down the sidewalk, westward on North street.
Now, there is not an access ramp at our corner, so it necessary for a wheelchair to cross North street at Fitch to be able to maneuver back onto the sidewalk and continue toward town. Well he didn't, he came down the ramp at Fitch and instead of crossing to the other side, he headed down the middle of the street passing beside us as we all stood on the sidewalk. I saw him coming and tried to catch his eye with an inviting smile, but he didn't look up, didn't look sideways at all the commotion, just simply kept driving his machine forward with all guns blaring. As he past me he uttered one sentence...

"Looks like a million dollar pile of kindling to me!"

And on he went, as fast as his chair would carry him. Ok, so its kinda funny, but I was tired, excited, worried, and little bit crabby all at the same time, and it pissed me off! Here we are with everything on the line, playing like we know what we are doing and what we have gotten ourselves into, and some cranky old guy rides by, with a holier than tho attitude, and throws out pot shots. All I could think in my head was... "Bitter party for one, your table is ready!"

I wanted to run after him and just push him over... but I didn't, I am better than that, and besides, by that point he was too far down the road anyway, so I bit my tongue, kept my feet planted where they were, and just stared in astonishment, desperately hoping he was one of the few and not the many, and remembered my mantra.... Acceptance, not tolerance!