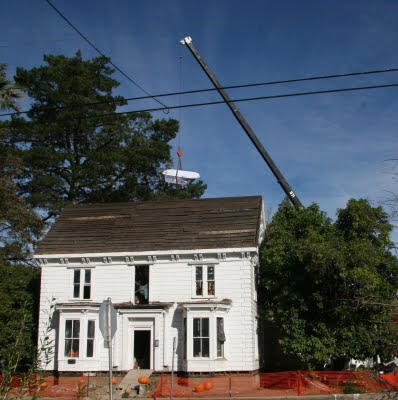 Tuesday October 27th dawned on 227 North Street with a monstrous crane parked on the property on the Fitch Street side. Roof trusses were the name of the game, for both the two story master section and the one story Breakfast room. While the crane and her crew were there we asked for a huge favor... The clawfoot tub that had been stored in the basement for years needed to be moved to the third floor guest bathroom. It is extremely heavy, and the concept of walking it up the two flights of very narrow stairs was inconceivable. So with a laugh at the concept, the crane crew lassoed that elusive tub and hoisted it forty some feet in the air so it could settle into its new home three stories up. So tubs, apparently, do have wings.


Stripped
The rumors are true! There is not a single solitary, tiny morsel of plaster or wooden lathe left in the house. Between Garry and Fabian (Garry's daytime help), and the two of us on the weekends, the house is now a blank slate. Nothing but studs, rafters, and flooring. It is very strange and kind of creepy in the way an empty barn is dark and mysterious. 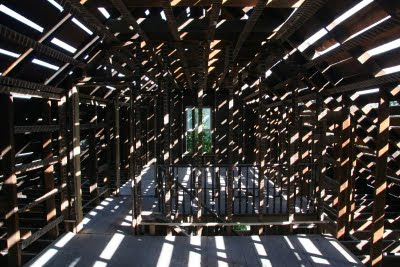 Click here for a slide show of the strange pictures that Phillip took as the sun was going down. Be sure to click play.
Garry and Fabian worked their butts off the last two weeks, first carefully removing and labeling woodwork for refinishing and reuse, and then tearing plaster, lathe, and gazillion nails off of the walls and ceilings. They built a chute from the second floor, down the old chimney chase, to the first floor, so plaster could be poured from the higher levels and be piled in the middle of the Living room for later removal to a dumpster via wheel barrel. 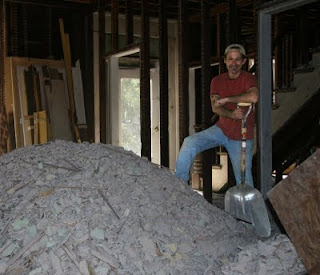 Tons of plaster was poured down this chute creating a mountain of broken plaster in the middle of the Living room floor. All of the lathe was tied into bundles and thrown out of the second and third story windows to await the final dumpster toss. Two thirty foot long dumpsters were filled with the debris, who would have thought there could possibly be that much. After the plaster and lathe was removed came the cleaning. Sweeping, sweeping, and more sweeping, followed by hours of vacuuming, and then a good blow with a yard blower. The house now sounds open and hollow, with just a moment of its former self here and there.  The staircase still stands all trimmed and railed waiting for the day when it surfaces will be refinished. 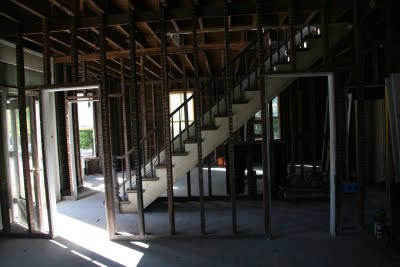 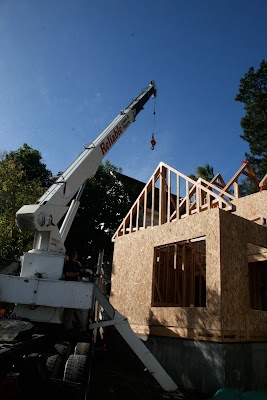 The old Hippies in town have been dancing naked in the streets to hold the rains away, and we ask that they keep dancing! at least for another eight days. By the end of next week we should finally have a water tight roof, lots of gaping holes waiting for windows, but a beautiful new roof nonetheless. The roof trusses were lifted into place last Tuesday as the cap for the modern construction, and when compared to the 140 year old construction techniques, the difference is astounding. It is so hard to imagine how the builders managed back then without pneumatic nail guns, air compressors, computerized pre-building,  laser levels, power saws, and building codes. How could you have possibly built a house back then, without umpteen million pages of do's and don'ts? Without super thick concrete walls and the ever important "Simpson Strong Tie" catalog? Without round nails? The nails in the original house are all cut nails, or four sided square nails. They are actually quite beautiful in their own right, and Phillip has been collecting them from the work site as they are pulled from old lumber, and will eventually have enough to fill a large jar. This coming weekend we will be reframing areas of the old part of the house that are getting some reconfiguration, in preparation for the arrival of Phillips Father. Ed Engel arrives the day after Halloween to begin the installation of electric and plumbing. Very exciting times ahead! Real power that is inside the walls, who would have thought.
Posted by Mark at 9:45 AM