One year and a Night visitor

Its true folks. We have been living in Healdsburg for year... My how time flys... and it's still raining.
I don't think the rain will ever stop. I am thinking that we should simply build a large boat around the house and float it away to sea. We spend our weekends working in the pouring rain as our fellow Healdsburger's (hee, hee, Healdsburger's) rush about to find tasty snacks, and rental movies so they can snuggle in by the fire as the storm rages on. Jealous you may ask? Damn right we are. You made your own bed, you say? yes we did sign up for this sentence, but it does not make it any easier. I want to snuggle in, drink toddies (what ever they are) and watch bad movies by the fire.  -Sigh-

We are still in mechanicals hell. The wiring goes on and on and on. Phillip is on the second floor and has done some of the third floor as well. By the end of this month, come hell or high water, we will be ready for our first big inspection. We can't even begin to think of closing in walls until the mechanicals are approved and signed off. We must finish the wiring, add smoke detector lines, add phone and cable lines, and add gas pipes. Then we get the pleasure of sealing up the sewer line at the street, and filling the entire system with water by putting a hose in the highest vent pipe on the roof. Then quickly run around and check for leaks. We need to do this once without the inspector, so we can make sure we are water tight, and then do it again with the city inspector present. I hope the pipes can hold the pressure of that much water.

I was going through pictures looking for interesting things to post, and I came across this picture... 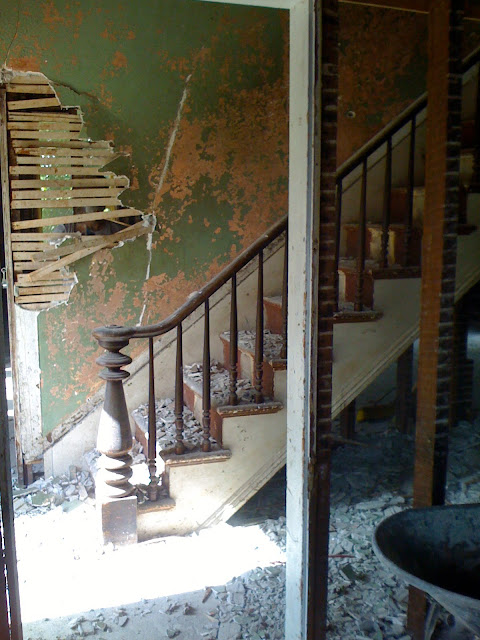 How quickly we have forgotten the decrepit and sad state the house was in when we bought it. We get lost in the slowness of what we are doing, anxious, depressed, and frusterated, but a quick look back brings things back onto focus.
*
A few "visual" and "moving forward" things have been taking place inside the falling down wreck we call home. A beautiful set of pocket doors have been set in place between the Library and the Study. 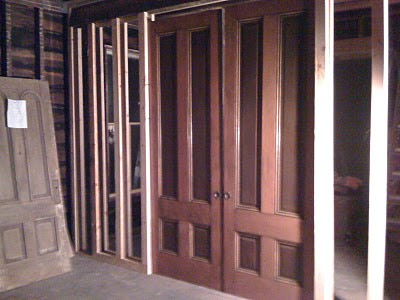 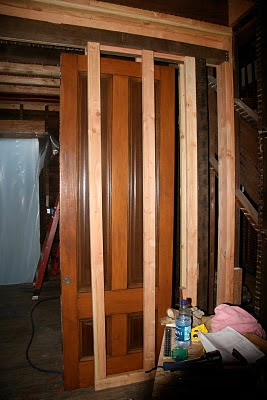 The set of doors came out of a house in San Francisco built at the same time as ours. After removing the original wall between the two rooms (it had to come out as it was only 2 x 3 construction and would not accommodate the new doors) we then constructed a new, much thicker wall and created pockets to the left and right for the doors to slide into. We have had a terrible time locating a floor track for them, but as soon as we do, we can add the top guide and the doors will be ready to slide.
The floor in the center hall has been preped for tile. No easy task! the old floor was taken up and the floor joists were shaved and leveled. New floor joists were then sistered to the old for added strength and stability. The old front door sill was removed, and finally plywood was laid down in preparation for cement board and tile. The toughest part was the staircase. Was it possible to cut the old floor away from the staircase without it collapsing into the abyss below? 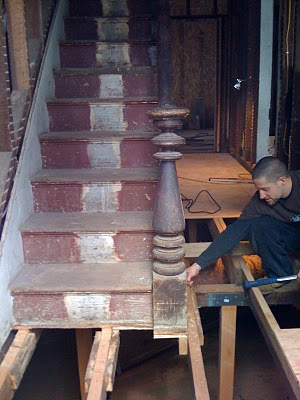 Brent (our part time carpenter) carefully cut away the old floor upon which the staircase had been built. Everyone crossed their fingers that it would hold. 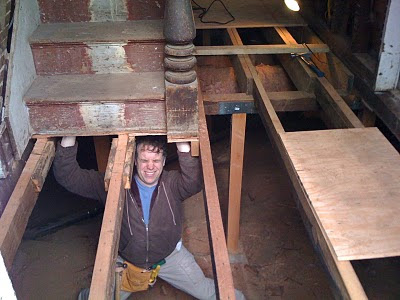 Phillip was underneath and held the whole staircase up for hours while we built around it to give it a new support structure. 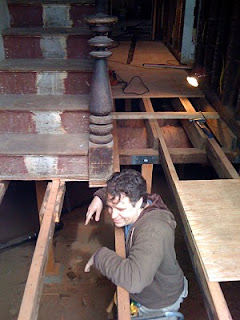 Well, maybe not. Perhaps he was faking the whole thing for the camera. Perhaps the stairs were never really in danger of collapsing into the earth from the get go. But it was a cute picture and he felt so manly holding them up.

Our wood floors are finished at the Mill and await our "go ahead" for shipment.  We are looking forward to bathroom fixtures, tile, and creating showers. I have been doing a lot of research on the new high tech methods of creating completely water proof spaces that never leak, mold, or mildew. The windows for the back of the house are primed, glazed, and ready to be installed, and Brent and I will tackle them this weekend.

*
The side note for today. In my last post I wrote of people that we do not know, who just walk into the house to have a look around. Well, last Saturday we were not able to put our front door back into place so we had to cover the opening with stapled down, black plastic. When we arrived on Sunday it was very apparent that someone or something had been in the house the night before. The plastic at the door was completely loose, there was a cigarette that had been put out on the floor at the top of the stairs, and a few small things had gone missing. Seems like we now have crossed the line. On top of everything else there was no floor inside the front door leaving a six foot drop into the cellar. Whom ever was in the house managed to walk the floor joists to the stairs. I would have rather shown up on Sunday to find the intruder moaning on the dirt floor of the basement after having fallen through the open floor, then at least we would have known who it was and find out why they had been in our home. I am one hundred percent positive that I would not have accidentally kicked them in the head a few times as I helped them out of the dirt, no really, I would not do such a thing... I promise! On the other hand, with the way things are today, who ever it was probably would have sued us for damages as we did not have a floor inside our front door and they fell into the basement. Ironic...
Posted by Mark at 3:44 PM