Somtimes a sad story must be told to light the way

As we move forward making the right decisions can be difficult. Difficult and expensive! No one told us to "beware the little things". A quote of three thousand dollars for door hinges made me have a sit down. And these are just reproduction, pseudo period hinges off a production line. Antique hinges are out of the question as it is virtually impossible to find enough of the same hinge to do the entire house. Sixty nine hinges, custom made to match the door hardware at one hundred and fifty dollars a hinge... OMG put me out of my misery now! I can think of better ways to use ten grand than swingin a door on it.
The door hardware, outside of hinges, is antique. We have found a great company on the East coast that is collecting period hardware for us, that does not cost and arm and a leg.... a leg perhaps, but not both. The hardware is very pretty, a small bit later than the house, 1880 instead of 1870, but its beautiful and give or take ten years won't be noticed... I hope. 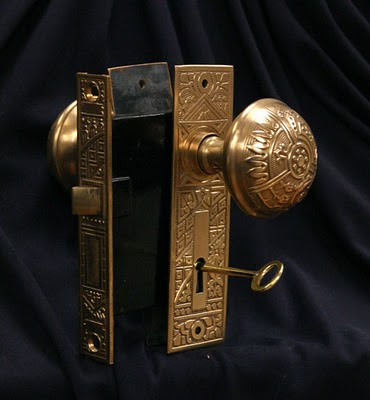 Beautiful, yes, but one drawback. Phillip will be wandering around the house with a huge ring of skeleton keys attached to his belt, like an old prison matron with a deep voice and a "don't %*?# with me fellas" attitude, locking the doors as he moves down the hall after dark. So guests beware of locked doors whose keys go missing in the middle of the night, or a subtle click at your door as you are nodding off to sleep. If we have to start bricking up doorways to cover the aftermath, you know we're in trouble.
And now a sad story. One I have hesitated to discuss. A few months ago during one of my internet excursions into the realm of research, this particular search was on gas lighting to be specific, I came across a gentleman and his wife who were losing their circa 1870 home to the bank. This in it's self is a sad story, but they were feeling a sense of relief at their decision and were ready to move on. They were selling off architectural pieces of their house before they left it. This too is a sad story and it made me feel bad for the home and it's losses, but we were not going to be able to talk them out of stripping it and we are in need. We purchased four gas ceiling fixtures from them, that had hung in the same home for one hundred and forty years. Although they needed work to return them to their original state they were an affordable option, and would get some true period lighting into our house that has none. 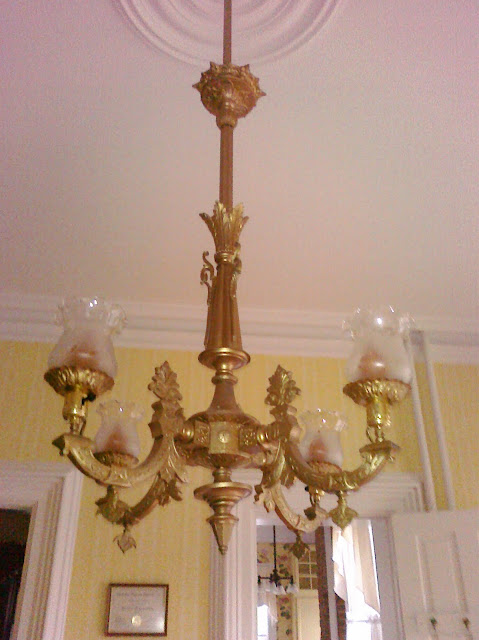 A matched pair of this fixture above for the living room. The shades, sockets, bobeche (the brass bits cupping the shades), and the finish are all incorrect, but workable.

This fixture, although needing the same things as the others, has great structure and will hang in the Library 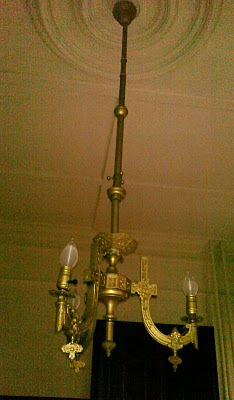 And lastly this small fixture, in the same condition, to hang in the center hall.
Remember up above when I said "they were an affordable option"? The light fixtures were paid for and picked up, in Michigan, by a dear friend who in turn took them to a frame and packing company for packaging and shipping. A packing company that packs art for worldwide shipping. You know those moments in life where you just put too much trust in others that you do not know? Well this was one of them that will cost a handsome ransom to rectify. Oh, if we could take it back. Oh, if we were not so trusting. Oh, if we could go back in time. Lines of communication broke down. I thought I was very clear about packaging the fixtures in new containers for secure protection. Protect and support the metal, the gas valves, all the small pieces, wrap, cover, enclose. I thought I was clear, specific and concise... I thought
After a long wait the fixtures finally arrived in Healdsburg. One look at the four old, beaten and abused boxes and we knew we were about to see the worst that long haul shipping can provide. The opening of the first box gave way to broken, bent and destroyed metal. One hundred and forty years these light fixtures had hung in the same home, and in a matter of days poor packaging had obliterated them. 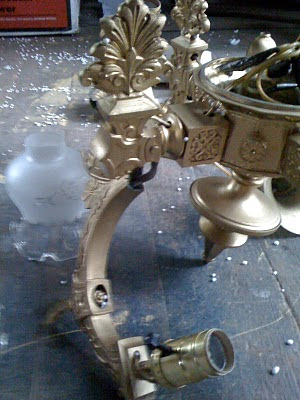 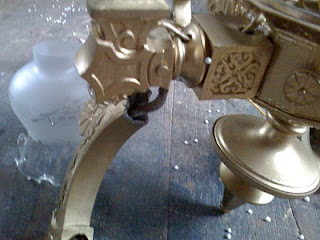 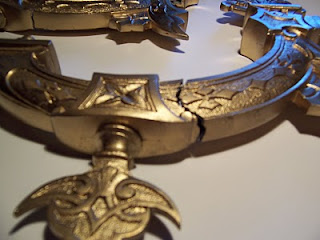 I have only photographed one of them. I could not bring myself to photograph the others. All four fixtures have broken arms and bent gas valves. Due to misunderstanding there was not any insurance and even if there were UPS would have taken one look at the packaging and denied the claim. I wouldn't blame them. All four need major restoration. By the time we pay for the restoration on top of what we have already paid, which wasn't a drop in the bucket, we could have gone for the really expensive pieces that I drool over. The funny tag to the whole story is that a week ago we received a bill in the mail from the frame and packing company. A bill for packing services.... HA!
The light at the end of the tunnel comes by means of a gentleman in Grass Valley California by the name of Paul Ivazes. Paul's Company, Quality Lighting, specializes in gas light fixtures and he has had the graciousness not to yell at me for what happened and will restore the fixtures to their original appearance. He has even gone so far as to provide us with pictures from a catalog for Mitchell Vance and Co in New York City, the Company that made our ruined fixtures in the 1870's, showing what the light fixtures looked like when they were new,  and what they will look like again. Paul is a font of information and really fascinating to speak to, he loves gas lighting, he loves his work, and it shows. 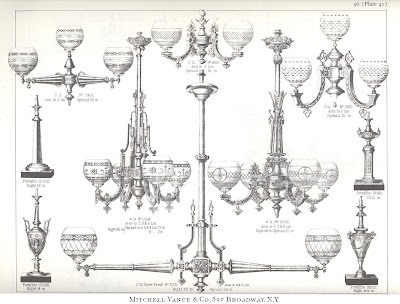 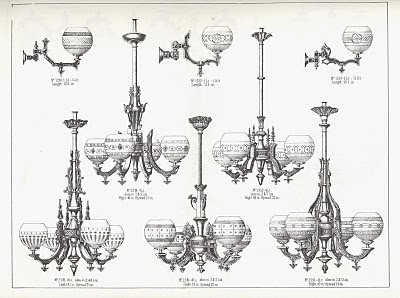 The fixture in the lower left is the fixture for the Library. It will be really exciting, someday in the future, when they all hang proudly in our house looking like their former selves.
Posted by Mark at 1:15 PM