The Door is red and her skirts are down

A huge busy weekend just whizzed past us, and after two 12 hour days we are completely beaten up.


But lots of things happened.
Phillip learned to use our paint sprayer to put a final coat of paint on the front door. I have to admit to everyone that once again we did not stick to our guns and allowed ourselves to be swayed. We went to the Benjamin Moore Paint store in search of a certain shade of red paint... you know the one, that shade of lipstick you wear with your "come @*%$ me pumps", or think "Jungle Red" so favored by Joan Crawford in "The Women". We wanted a lovely old fashioned oil based paint. Well, as some of you know, and some do not, the state of California has decided that oil based paint is ultimate downfall of our environment, and paint companies were forced to reformulate their paint for use here. The Benjamin Moore salesman ensured us that a water based paint with an extender in it would be far superior to the oil and flow just beautifully... how do I say this delicately? "Superior my ASS!" By the time Phillip was able to get his brush to the bottom of the door along one side, the top was already drying. The extender turns out to be fifteen dollar snake oil, and not worth its weight in dog poo. But once the first coat was on there was no turning back. Three coats with a brush and a final sprayed to try to salvage the texture of the surface. Its not really too bad, but it does not have that lovely smooth, stroked surface that oil base paint has. If anyone is heading to Nevada, Utah, Oregon, or Arizona, we sure could use a cross the border, oil paint smuggling! 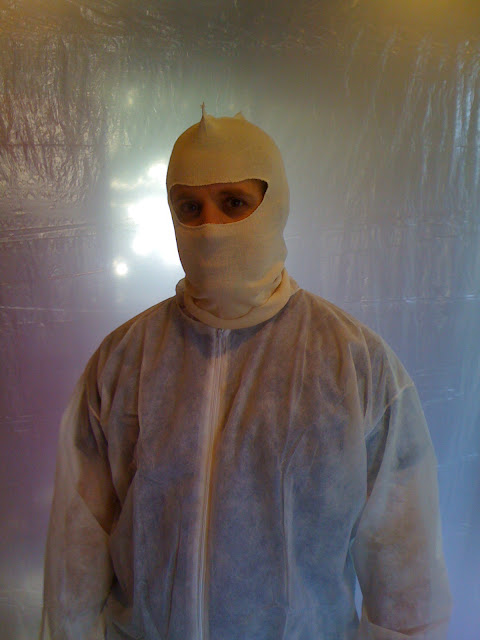 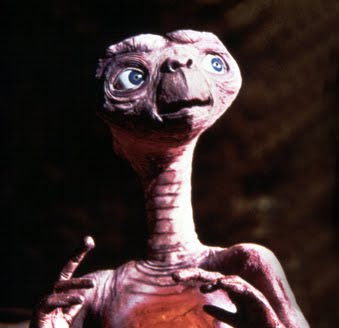 He is going to do what to my what? 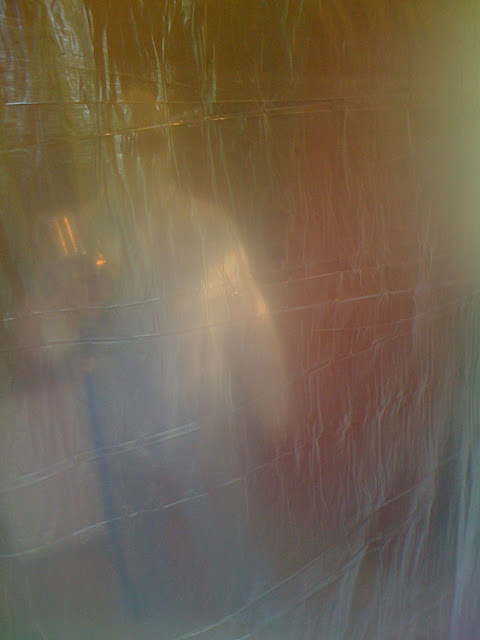 Behind the filmy wall Phillip began his work of spraying a final coat of red and then brushing it out lightly to remove the stipple effect. 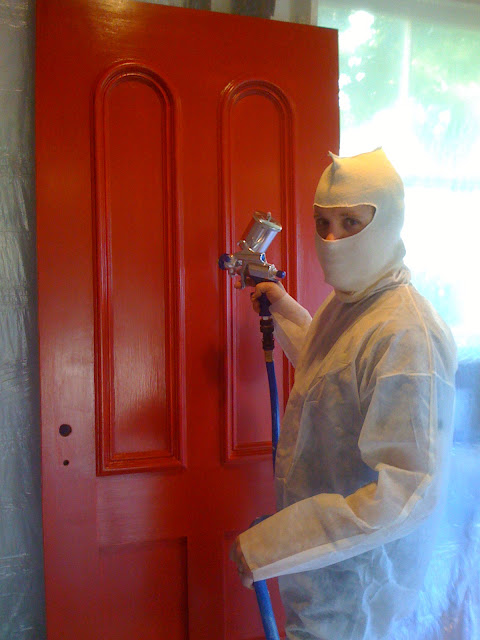 And "red" she is!
Hours and hours of labor into this door and she was ready to hang. Phillip spent all day Saturday on the hardware. Reproduction hardware that we had stripped of its "Antiqued" finish, and then like the hinges it was soaked in acids and buffed to a lovely patina. The decorative part of the hardware was created by a company to companion with a Baldwin entry lock. We found the marriage of the two to be a marriage that was not perfect and required many a trip to the hardware store for screws and files. 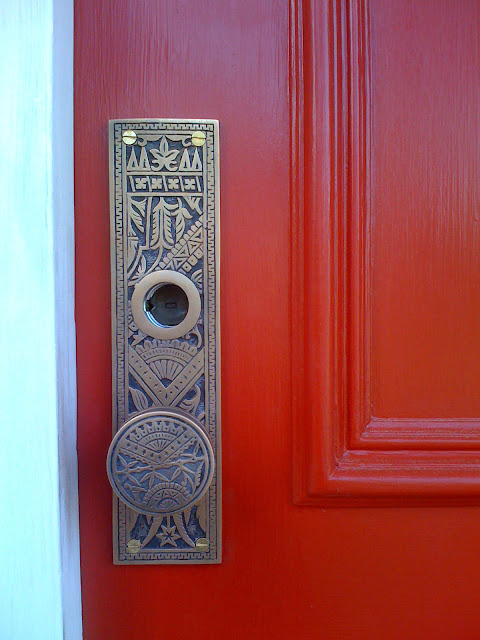 We will have to darken the screws, and get a longer cylinder lock (the one that was sent must be for a thinner door) but considering that it is new, it is very striking. 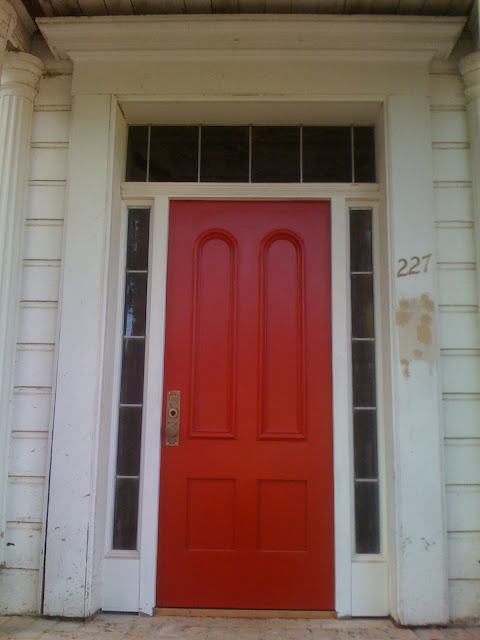 Endless amounts of time were spent hanging, removing, tweaking, rehanging, chiseling and sanding, until the front door hangs and operates beautifully. I have to say we love our "boy is that door red" front door, and its really nice to be able to lock the house at the end of the day.


*
For my part the weekend involved  a remounting of the skirting on the front of the house. We needed to put it back on so that a photograph could be taken. The photograph is for an insurance underwriter. We are graduating from "Builders risk" to big boy insurance from State Farm. Builders risk didn't really cover much and we are grateful to finally be in a position of getting real grown-up, home owners insurance.
The skirt of the front of the house is the original one that was removed prior to the lift. The skirt for the sides of the house did not survive the removal because... hmmm, that's a really good question, I have some things to say about it but I should not do so in polite society. Brent (our part time helper) and I worked away in the hot sun coaxing the supports and the original boards back into position. We then sanded them down to the bare wood and prepared them for filling. By the end of the day on Monday the house will look pretty darn good from the front, and a Kodak moment will take place. 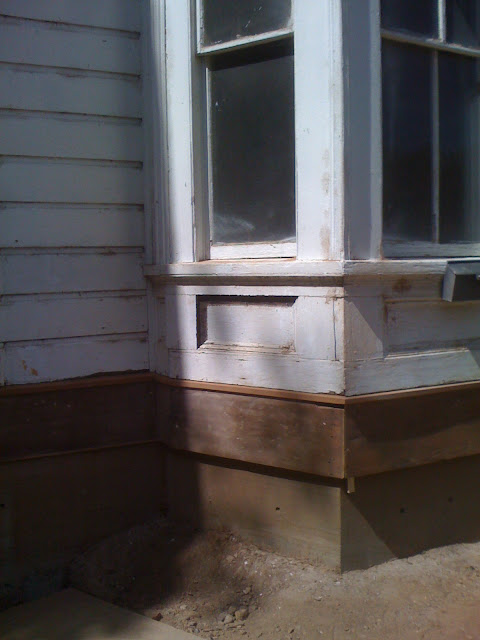 Not bad for one hundred and forty year old one by fourteen redwood.
So we wind the weekend up with a red front door, our structure covered by a skirt, and Sherwin Williams as our new paint company.
Posted by Mark at 3:24 PM