One year when the parade passes by 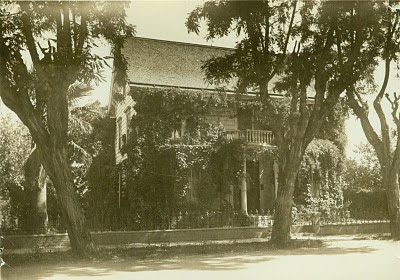 227 North Street sometime between 1930 and 1950
It had to happen... June 15th 2010...  It was exactly one year ago today that we signed the papers and officially became the proud new owners of, well, the, uh, that, uh... the wreck otherwise known as 227 North Street. The whole year has flown by and we have so, so far to go with the restoration. But every day a little bit, and every little bit adds up to a lotta bits, and a lotta, lotta bits add up to a whole bit! Ahhhh, we should live so long!


*** New Flash ***
Small town life, Healdsburg, California
Memorial Day weekend led us to a new discovery about our home. The Tuesday prior to the holiday trucks began to park beside our house on Fitch street. The great big, my "hmm-hmm" is too small, kind of trucks... you know the kind, with tires so tall that you need an escalator to get inside. Yellow caution tape was strung between the trucks blocking any access to the street side all along our property, including blocking off any access to our carriage house, not that we needed to use it, but if we did, too bad. Fast forward to Thursday 6 pm, the kick off of the holiday weekend which begins with the "Future Farmers of America" parade and fair. All of those trucks were now laden with folks in folding chairs, likewise every available bit of street side and sidewalk was covered with happy parade viewing fans. And what a parade it was! I used to live in South Pasadena very near the line up route for the Festival of Roses parade. We would rise before the sun on New Years day and walk down to "Orange Grove Boulevard" to view the floats all lined up and ready for the world to see them, so I had high expectations for the local Healdsburg parade! And I was not disappointed. Anyone and anything may grace the parade route if they can pay the entrance fee, and anyone and anything, indeed paraded through town. If you were not in the parade you were watching it. 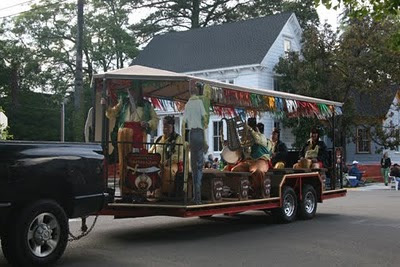 Yep, even Shriners...
I seem to remember silly little cars and big shoes, I guess time moves forward even in this small town.
Posted by Mark at 1:45 PM