What goes around sometimes comes back better

Mornin everyone. I have been putting my blog out to the world to attract readers as I spend way to much time writing each post, and I would like to share them with a wider audience. So I would like to welcome the new readers and hope that you will find the time to go to the beginning of our blog so that you can ride this crazy roller coaster with us from the starting gate, and I would urge everyone to become a follower.

I suppose that sometimes really horrible things happen for a reason. At the time it is hard to imagine that this is possible... but I am now a firm believer. In my post on March fourth, "Sometimes a sad story must be told" I told the horrific story, well horrific for the DIY home restorers with limited means, of the 140-150 year old light fixtures we purchased from a home in Michigan. The fixtures were originally gas, and had been visually messed around with over the years, bad wiring for electricity, gold spray paint, incorrect glass globes, the usual things that happen as years march on and folks "update" the fittings of their homes, but nothing as bad as the cross country trip they made via UPS. For all the details read the other posting, but lets suffice it to say that the person in charge of packing them should get out of the packing business! The fixtures arrived in Healdsburg shattered into pieces. 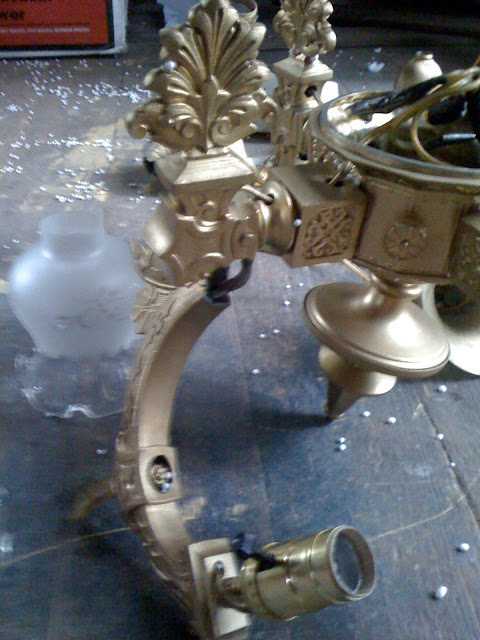 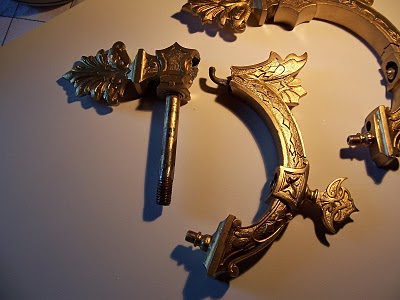 One fixture arrived a day before the other three and we actually cried when the box was opened to reveal its shattered contents. But we pulled ourselves together and hoped for the best with the other three. The very next day we went through the tortures again as each of the remaining three boxes were opened to broken arms and cracked metal. I felt so responsible, I had let us both down by not making one hundred percent sure that everyone was on the same page with the seriousness of the value of the lighting and the need for ultimate care and packaging. I am sure that the first thing everyone thinks is "insurance"... There wasn't any. The packager had failed to fill in the appropriate information leaving a basic $100 per box coverage, and the fixtures cost ten times that for each one. Besides, if a UPS representative took a look at the packaging they would have fallen over laughing at us, one of the boxes was an old beat up shop-vac box.


I am not one to beaten while I am down, and I dried the tears and got back on the horse! Through a recommendation I was led to "Artisticlicense.org", a San Francisco based group of artists specializing in the arts of home restoration.  There we found Paul Ivazes of "Quality Lighting". I phoned Paul, and first begged him not to yell at me! Paul is an amazing artist who managed to take broken piles of pot metal, pipes, and brass fittings, and not only put them back together, he put them back as they were when they walked out of the Mitchel Vance NYC showroom in the late 1860's. Carefully every piece was disassembled into its small parts and stripped bare of its gold paint, and delicately welded and sculpted back into shape. 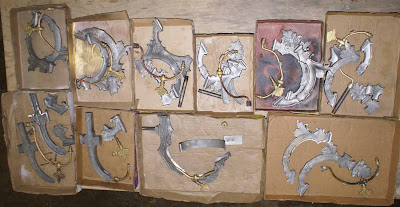 Each arm was split into its two halves prior to reworking. Note the brass keys and gas lines. 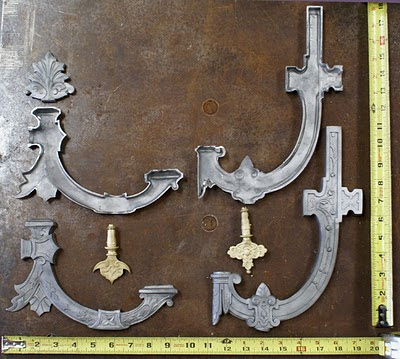 Months have passed and all we saw were the photographs above. Paul told us to trust him and he would make them beautiful. He was not kidding. A couple of days ago he pulled up to the house at nine in the morning... Nine in the morning?, he lives three plus hours away... crazy! In the back of his truck was a pallet. strapped to the pallet were four Renaissance Revival gas ceiling fixtures that could not be ours, and yet they were. 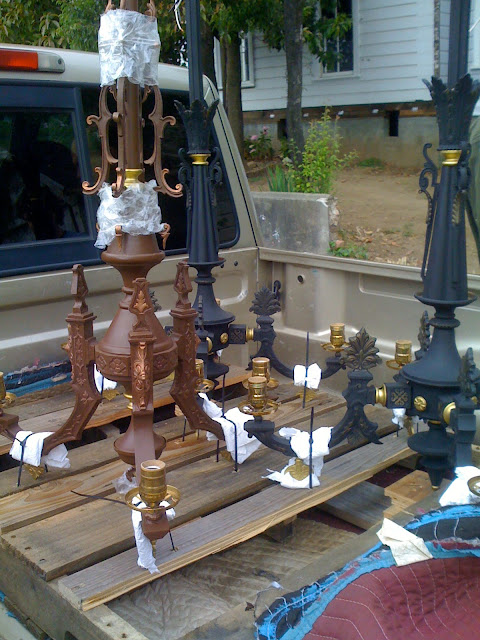 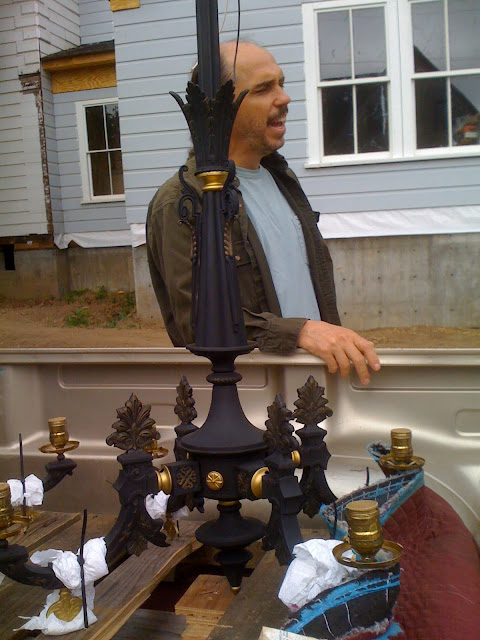 That is Paul standing proudly behind his work
Its still somewhat hard to believe they are the same fixtures. The colors of the Patinas on each one is the original coloration when they were new, and we love them! I promise to post more pictures as soon as I can figure out how to hold them in the air and take some. All they need now is the glass globes and some rooms with walls and ceilings in them to hang from.... but that is another story! 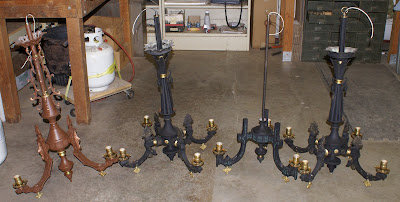 The caveat to the story is that if the fixtures had not been ruined in shipping we never would have had them restored to their former glory. We would have come up with our own way of removing the gold paint and applying some sort of a finish that would look, hmmm, I guess rather shabby chic, and we all know how I feel about shabby chic... get me to the vomitorium quick!!!


*
Now our lighting sights move onto other rooms. The dining room... although in the time period of the house a dining room fixture would have been played down and very simple, we are looking at using a modern train of thought and putting in a fixture that is glass and sparkling, and perhaps a little over the top. Below is the one we are looking at... what do you think? 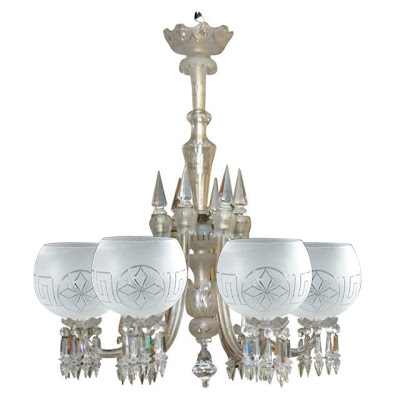