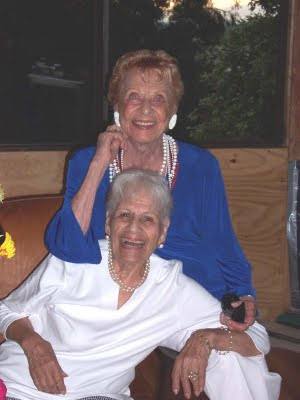 It all started with these two Ladies. Mimi and Thareen. Reed and Aaurora, Nutty but Nice! Two old show broads that lived across the street from us in Los Angeles. The two ole gals had lived in their home together since 1948. Mimi and Thareen were the best friends you could ask for. Crazy, Wacky, and just plain fun. We had a number of years with these two old girls, laughing, drinking, "Cocktails at 4", and simply hanging out. Two fair damsels who had that spark of life that was infectious!

Through the Girls we met Thareen's Grandson and his husband, Stewart Allen and Thomas Pope of Healdsburg California. They would visit the Girls often and soon we all became fast friends. Phillip and I were invited to Healdsburg to visit Stewart and Thomas. Neither of us had ever been in the wine country and we fell in Love with the place. I was born and raised in Oregon, and Healdsburg and the countryside felt just like home, so we began looking at real estate in Healdsburg.

Over the past four years we had been living bi-coastal. 2 weeks at our home in Los Angeles and 2 weeks in NYC, and then back to LA. But we began to dream of life in small town away from the madness of the big city. We made frequent trips to Healdsburg over the past couple of years to look at houses. Not an easy task for us as we are always looking for property that is challenging and inspiring, not "done" in someone elses idea of style. We were looking at more modern properties, 50's and 60's mid century, and vacant land to build.

Neither of us are afraid of change and moving on, so we put our LA house on the market at the end of last October. Much to everyone's surprise our house sold in 3 weeks. We were packed up and someone else owned it by November 21st. We put everything in storage and moved into our Upper West Side apartment in NYC full time, and continued to look for a home in Healdsburg. Our real estate agent, Dennis Mulvihill, brought to our attention a much older home that was going into short sale, 25 west Grant Street, the 1903 Calderwood Inn, we had not really thought of living in a hundred plus year old home again, but we considered the concept and flew out to see it. Well, we were bit by the bug! Once we saw the house and its beautiful grand rooms we were in love. It was a huge stretch for us financially, but we figured out a way to make it work and made an offer early last December. Now anyone who has tried to buy in short sale will understand the torture of it! We sat in the number 1 position for months waiting for the bank to decide to move forward. The end of that story was a bit sad, but fantastic in the long run. At the eleventh hour another party swooped in with an all cash offer on the Calderwood Inn and took it away from us. Although we were given the opportunity to meet the offer, who has that kind of cash sitting around? No one we know.

In the mean time, back at the ranch...
The short sale was taking so long, and certainly not a sure thing by any means, so we continued to look at houses... About 20 months ago, when 227 North Street was listed by Sothebys, Stewart and Thomas had gone to see it during an open house. Stewie called us and said "you would not believe this house we are in!" He took some pictures to send to us, but 227 North Street was listed for 1.6 Million dollars--way, way beyond our price range. But, the next time we went to Healdsburg, Our real estate agent, Dennis, took us to see it just for fun. It was a wreck and needed everything! But Phillip was in love, he talked about that house for weeks and weeks after, imagining all the things that needed to be done and what they should look like. We both, of course, came back to reality and back to looking at mid century modern... in this town we began to call them "Grandma's House".

The first of January 2009 while we had the offer standing on the short sale, Calderwood Inn, we noticed that 227 North Street was back on the market as a for sale by owner, and listed for $995,000.... and I made the first phone call to the number on the sign...