Today we will back up a moment in time and pick up the story of our house right after the purchase.

Once we owned 227 North Street, we were ready to roll big time. We already had floor plans and elevations. Our Builder was on board and chomping at the bit to get started. All we needed was structural engineering, and we would be ready to head for city hall to submit our plans for permits. Dave Duncan of Duncam Engineering, was faster than lightning and you could not ask for better. With Daves help we were ready to submit 2 weeks after we owned the house. I heard that we got our permits in record time.... But to us it was 6 weeks of pure torture. The Plan check company is in Sebastopol, and was very dark and mysterious, seeming to never answer their phones, and for some unknown reason they only worked four days a week. So we paced back and forth making a huge rut in the floor of our rental home while we waited, and waited, and waited, worrying about earth quakes the whole time. We had a few wrenches thrown into the pot for our permits, one being the "Historic Evaluation" (see "The Third White Knight of 227 North Street" below) and the second wrench being a handicap ramp, to access the sidewalk from the street. Did you know that you cannot deed any portion of your land to another party if you carry a mortgage on it? There were some who did not know this, and we were in fear of never receiving our permits, but at the eleventh hour an agreement was reached. I will say honestly that I really do not look forward to one of those lovely vibrant, neon yellow, bumpy sidewalk ramps in front of our home. I suppose that the government agencies in charge of creating the whole look and environment of handicap ramps failed to get a consultation from the gay boys, who could have steered them in the direction of "making it pretty!" 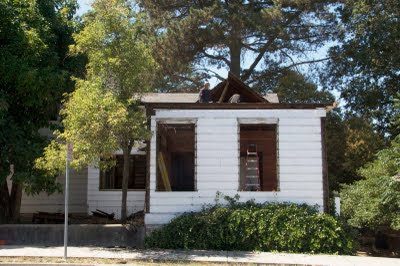 On August 19th, the day after we received our permits, our Builder Jim began the demolition of the old East wing of the house. This scared many a folk as it seemed the house was being torn down. The East wing had been added on, most likely, around 1910, and was the worst part of the house. This wing was warren of little rooms and heading south rapidly as its foundation, or that part of it that actually had a foundation, was cracked, and bowed out terribly. Add to that, ancient plumbing that had leaked for years and evidence of a (dare I say it...) a long since gone rat infestation, and we were so happy to see the whole thing razed to the ground. 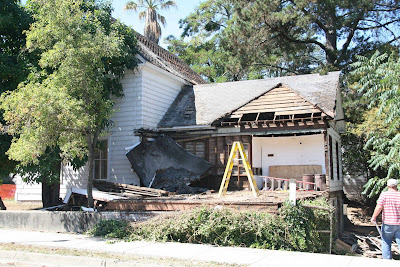 Sooooo exciting to see it come down and expose the original rear, or North facing wing of the house.

We then took the roof of the rear wing in preperation for adding a second story onto it. You can see floor plans and elevations in a slide show here. Be sure to hit play. 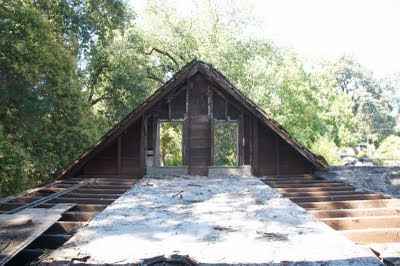 Well folks, with the tear down complete, and the house lifted into the air, the old foundation removed, and forms going up for the new one... we are up to date. And although I know this post was not one of my usual dry and witty entries, sometimes you have to get down to the nitty gritty to propel the story.